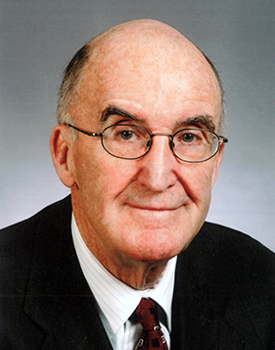 Jack Major is a mediator and arbitrator with ADR Chambers. He is a retired judge of the Supreme Court of Canada and has helped to shape the legal landscape in Canada through his years as a lawyer, judge and counsel.

He was a litigation partner at Bennett Jones and practised at the firm exclusively for 34 years. He was involved in several cases that brought about significant changes in local, provincial and federal policies and legislation. He also served as counsel to the Canadian Medical Protective Association (Alberta); counsel for the City of Calgary Police Service; counsel at the CCB and Northland Bank (Estey Commission) and was counsel for the Province of Alberta at the Code Inquiry into the collapse of Principal Group of Companies, 1987 and in constitutional cases before the Supreme Court of Canada. He continues to advise the lawyers at Bennett Jones as counsel to the firm.

Jack is the recipient of the Canadian Bar Association’s 2015 President’s Award. This prestigious award recognizes the significant contribution of a Canadian jurist to the legal profession, to the CBA, or to the public life of Canada. He is a member of the Canadian Institute for the Administration of Justice and the Canadian Judges Conference. Jack was appointed Queen’s Counsel in 1972, and was appointed a Companion of the Order of Canada in July 2008.

Jack lives in Calgary, Alberta and is willing to travel.