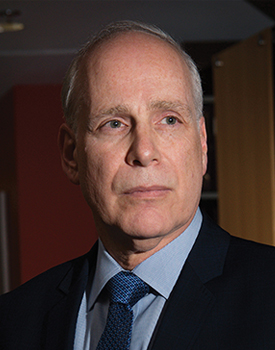 Marvin is a certified construction Adjudicator (ODACC). He has served as mediator and arbitrator in cases involving farm debts, livestock, advertising, marketing, and sales of goods and was appointed as an arbitrator by the Ontario Farm Products Marketing Commission. Marvin has expertise in corporate/commercial litigation and administrative and public law, including cases involving banking, contracts, labour, corporate and shareholder remedies, securities, tax, insurance, fiduciary duties, torts, transportation law, professional liability and ethics, and constitutional/human rights. Marvin also has experience with administrative/regulatory matters and constitutional/human rights disputes.

Marvin was recently appointed a Deputy Judge of the Small Claims Court in the Toronto Region. He is the President of the ADR Institute of Ontario and was the recipient of the 2019 Star Award for his leadership and direction provided to the ADR Institute provincial membership across Canada. Marvin is also the Chair, Governance Committee, of the British-Canadian Chamber of Trade and Commerce.

Marvin is a Chartered Arbitrator (C.Arb.), a Fellow of the Chartered Institute of Arbitrators (FCIArb), and a Fellow of the Asian Institute of Alternative Dispute Resolution (AiADR). He is certified by the Law Society of Upper Canada as a specialist in civil litigation, and is a former administrative law judge, and adjunct law professor at Osgoode Hall Law School where he taught legal ethics and trial advocacy.

Marvin holds a Master of Laws Degree in Alternative Dispute Resolution from Osgoode Hall Law School where he served as a negotiation and mediation coach. He has also served as a civil litigation and advocacy instructor at the Law Society of Upper Canada, Bar Admission Course. Marvin is the editor of “A Practitioner’s Guide to Commercial Arbitration”, published by Irwin Law (2017).

Marvin is a founding member of the Chief Justice of Ontario’s Committee on Professionalism in the Legal Profession (2001). He was named Commercial Arbitration Law Firm of the Year in Canada from 2015 to 2017 by Global Law Experts, M&A Today Global Award and by The Lawyer International Global Award. Marvin was the recipient of the 2017 Corporate International Magazine Global Award: Partnerships Disputes Mediator of the Year in Canada.